I'm actually getting this posting out on Monday -look how organized I am! So this is the week that my belly exploded. I'm sure I say this every week (I'm too lazy to go back and look through the archives), but this time I'm being serious. There is an actual noticeable, significant difference between this week's picture and last -heck, I think there's a difference between this morning's belly and yesterday's!
Weight: I officially hit 30lbs... not that I should be so proud of this, but it was inevitable. Hopefully the next few weeks will slow down and I can keep the overall gain to under 40 -here's to hoping!
Maternity clothes: Still the same pants and some shirts. Although the larger shirts I was wearing are starting to creep up on me, which is not an attractive look. So for now I'm getting by with the larger/longer tops, but I'm sure that those days are numbered.
Stretch marks: None... I'm really, really hoping this one passes me by, but at the end of the day, I guess it won't be such a big deal.
Baby Movements: It's now getting to the part where he moves so much that I get nervous when I don't feel him at his regular intervals. We've been using the doppler at night to check on his heartbeat when we can't feel him, but it's also strange b/c sometimes you can see him move from the outside, but I can't feel him internally. I'm blaming it on the anterior placenta buffering some movement, but it could be the extra layer of flab that's coming between him and me. I'm interested to see at our next ultrasound how he's laying. I'm still convinced he's pretty sideways, but at this point I have a feeling he's supposed to be more vertical.
Cravings/Aversions: Still on my sweets kick, which is probably contributing to the weight, but at this point I figure why not. (Someone remind me of this when I'm complaining how hard it is to take off the baby weight!).
What do you miss: I'm definitely off running... any sort of running/brisk walking causes cramps/aches that are not pleasant. The elliptical seems to be ok, but unfortunately running is off the table for good. I ran for the bus last week (2ce) and even in those very short distances got the cramps/aches -it's just not worth it. I'm also starting to get more out of breath. I think I just can't breathe as deeply so I feel more huffy than before.
Other: Nothing else really to report. My tailbone is starting to get sore from sitting too long and I've started to get the leg cramps at night that I've been reading about. My energy levels seem pretty good (not back to the level of first trimester fatigue) and other than the uncomfortableness of my stomach stretching (especially when I eat too much), things seem to be going well. My belly button is still in, but definitely shallow. Huge has 3 more days before he claimed it would pop and I think I'll make it, but we'll see. I've decided that we need to get cracking on getting ready for the baby, so we finally ordered the crib and changing table. I think this weekend we'll be making a trip to Ikea for a dresser and then we can finally start setting up the room. I kind of just want to get it done. Here's the picture for the week -I warned you, it's big! 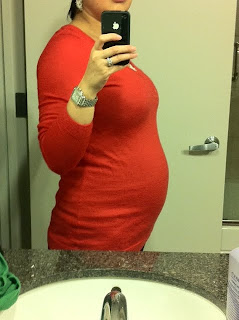