I'm pretty much done with my first trimester, and what have I learned? That morning sickness is not for the morning (mine was worse at night) and that you can never trust your scale.
So first with the morning sickness. For me this was pretty much just all day nausea. It started right on time about week 5 with a low grade nausea that I would equate to sort of like motion sickness. No puking was involved and it was definitely liveable, albeit not that pleasant. It then kicked itself up a notch and turned into full fledged sea sickness, but since you were never able to get off the boat, you never felt better. Again no actual vomiting, but this time it was accompanied by a lot of dry heaving and false alarms. Poor Huge had to deal with me at the worst b/c for some reason I felt best in the morning and then would get progressively worse as the day went on. I would feel so horrible that I would almost be at the point of tears by the time bedtime rolled around. Falling asleep would be hard, but I would try as early as possible knowing that I would feel better in the morning (only to start the cycle again). None of the usual remedies helped -ginger ale, ginger candy, crackers... nothing, in fact some of them even made it worse. I then decided to implement a strict eating schedule every 2-3 hour and miraculously that seemed to alleviate things a bit. Not completely gone, but it put me out of some of my misery. Of course I didn't really figure it out until about week 10, so at that point it could have been on it's way out, but whatever the reason I was happy it was working. Thankfully when I hit week 12, things have calmed down considerably. I still get queasy at times, but the dry heaving has stopped and I would venture to say I have it beat (please don't prove me wrong!).
With this 2-3 hour eating schedule and my sudden love for carbs (I mean bagels and pasta have never had a bigger fan than I am right now) you would assume that I must have gained at least 10 pounds by now, because I would. And to be honest I was worried there when I had already gained about 5 pounds by week 9. And even though I'm definitely bigger and thicker, I managed to come out of the first trimester with a respectable 3 lb gain. That's quite the feat since I've been known to gain at least that much after a glutenous dinner! I think the other reason for this is the fact that sugar has decided to be the enemy and I am no longer able to enjoy the sweet delicious treats that should be part of a pregnant woman's diet (or so I've been told). All sugar, no matter how small the quantity (I mean, I'm talking about a tic tac or a single starburst) makes my mouth taste funny and I get a queasy feeling in my stomach. Sigh... I was hoping for a pregnancy of gummy worms and ice cream, but sadly that does not look like my future, but this is definitely evidence that I'm growing and that I probably look bigger than my alleged 3 lb gain. I'm going to pretend my scale is my friend and telling me the truth, but I think we all know better! I haven't quite made the jump to maternity clothes yet, and it's hard to imagine that I will fill them out shortly, but I'm going to try to document it and hopefully keep it to a reasonable (and healthy) level. It's funny b/c I look thinner in my week 8/9 picture than I do in my start picture, but I think my "start" is actually about week 5... guess the nausea kicked in right after that. 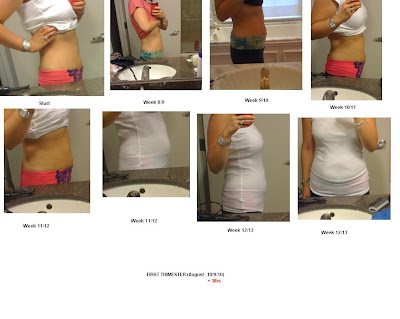 Other than that the first trimester has been pretty fast. We got to see the little bugger a couple of times now and so far so good. I'm keeping my fingers (and toes) crossed that everything goes smoothly and hoping the ultrasound on Friday (tomorrow!) goes well. Now that the secret is out and I've told work and friends (and pretty much anyone else who will listen), it's starting to kick in that this is real. There's going to be a baby come April 2011 whether we're ready or not! Who's taking bets on that?