At Adelia University, it's never too early to start learning your letters and animals. 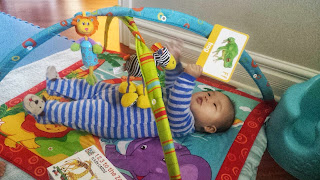 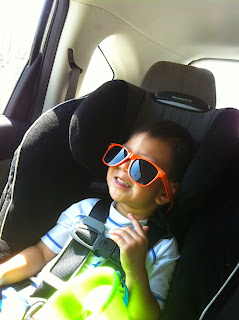 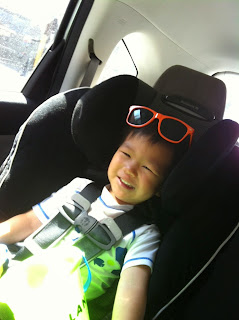 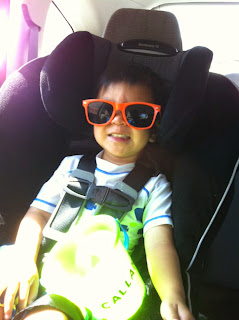 Happy Wednesday!
Posted by rdg at 1:16 PM No comments:

Conversations with a toddler

Callan is saying more and more words and stringing along some sentences (in broken English) but there are certain expressions he has that aren't quite right. I'm not sure where he got it, but everything he can't find or see is either "hiding" or he "ate it". Also when you ask him a question and he's thinking of the answer he'll do a long exaggerated "um..."

Today Adelia told us of this conversation she had with Callan and I laughed out loud because I can totally picture his face when he says it.

Adelia: Callan have a seat on the potty.
Callan: okay.

A does to look. Callan, Where's the pee?
Callan: um it's hiding

5 years: who would have thunk

Happy anniversary Huge! We made it 5 years and had some amazing experiences and some great times along the way. We went from kids to full blown adults with a house and these incredible kids. High five. Here's to many more anniversary celebrations.

p.s. Seriously, could Nora look any more like you?!?
p.p.s. The traditional 5 year anniversary gift is wood. Guess I should have brushed up on my whittling skills... 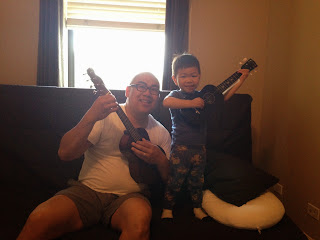 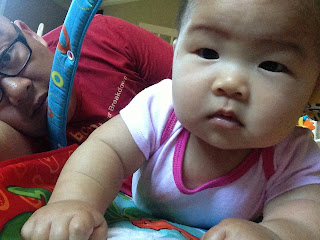 Thank goodness for technology. It makes keeping in touch so much easier -both of our families are far away so it's nice for them to be able to see the kids grow, but also because Huge has been travelling so much, he can check in and make sure the kids are ok too. 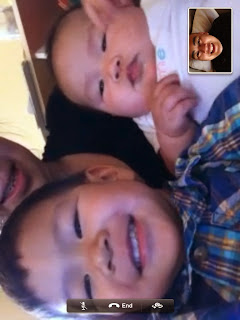 Checking in on facetime. 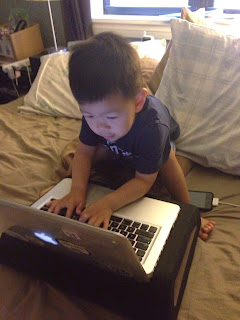 Dear Callan and Nora-
Well it happened. You're getting lumped together and there's nothing you can do about it! I have a hard enough time getting one newsletter out a month at a semi-decent time, and to have two due within a week of each other is ridiculous (for me). So here it is... the new and improved COMBINED newsletter. In case you think I don't understand how you feel, I do... Your uncle Matt and I have birthdays just 1 day apart and we shared birthday parties for a long time as kids. It's a good thing too because I'm way cooler than your uncle so I really brought the coolness factor up to these shin-digs. Kidding. Your uncle Matt is (sometimes) cool on his own.

Anyway, this (past) month you kids turned 26 and 3 months respectively (as an aside, when do you think I'll stop counting Callan's birthday in months? I'm already struggling and need to bust out my fingers to figure it out.) It has been a whirlwind month for everyone. Mama went back to work (boo) this month and your daddy has been travelling a whole lot. *phew* and you wonder why you don't get these on time. 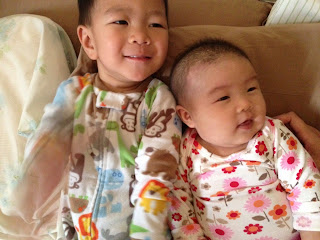 Dear sweet Nora-
What can I say about you. You are this perfectly sweet (round) squishy baby. You're really laughing and cooing a lot these days and I love it. You tolerate a lot -the aggressive love from Callan and the abandonment from your mommy and daddy (you get way more time in the swing than your brother ever did). But, you're amazing. You have the sweetest disposition and after the rolls, that's the first thing everyone comments on. You are just a sweet, sweet baby. I need to take a picture, but you have the sweetest face. When you smile and laugh, your eyes close shut and make these perfect anime half moons. And you have a crease on the bridge of your nose so when you cry, it's hard to take you seriously because your eyes squint shut and create a perfectly straight line. 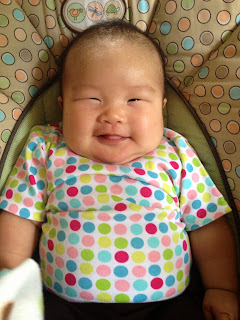 (You can see the beginnings of the half moon eyes I'm talking about in this picture).

I need to post the video of you laughing because it truly is one of the sweetest sounds. If every baby was like you, there would be a huge over-population problem because you are the sweetest, calmest baby. You love to snuggle, but you also love your own space. You sleep and eat like a champ (and also poop like one. Seriously baby girl, you like to save up your poops for one huge, giant one. It blows me away (literally) every time).

You've taken to Adelia, as we knew you would and although you don't sleep super well during the day for her, she's gotten you to take the bottle and you've gotten to take lots of field trips with her and Callan. 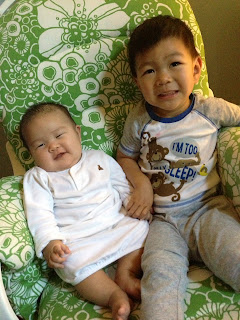 Callan-
You are a bundle of energy and are just so full of personality. Sometimes that's code word for a stubborn/crazy/opinionated/maddening/frustrating/bossy little boy, but sometimes it just means you've got a lot of spunk. We joke that we should put you in commercials or on tv so you can start pulling your weight around here, but for now, you can just entertain us. You're starting to talk a whole lot more and it's really funny to see how you communicate with us and uncanny to see what you remember. 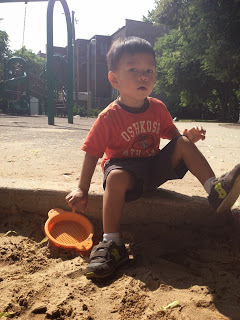 You still love your sister, but have started to get a little bit more aggressive with her. I don't know if you really are trying to engage her (you know, with a god game of catch or tag), but we have to watch you a little bit. The funny thing is that when this happens and I tell you to be gentle or to not hit her, you'll ask if you need to go to time out. We've never really done this with you (I think I tried once) and I'll ask you if you need to go, you'll say yes and climb up onto the chair (this usually happens in the living room). After about 20 seconds you'll climb down and come over to say sorry to Nora and give her a kiss. I'm still not sure where this came from, but I think you've pieced it together from your friends and us. Your friend Michael's mommy does time outs and we ask you to say sorry/give kisses when you've done something wrong, but it's really amazing to think of how you're putting all these little things together.

What else bubs. You make me laugh on a daily basis and even when you're the most frustrating, you're still my favorite little boy. You love to sing and dance, you love to cook in your kitchen and help out in the big kitchen (you pretty much love everything about the big kitchen) especially if the task is cracking eggs or mixing, you love to give hugs and kisses (usually -sometimes you'll go around saying "no kiss", "no hug" and yesterday our friend Sabrina got "no look") and you're just turning into this amazing little boy. As boy-ish as you are (you love dirt, water, cars, planes etc), you are also this sweet sensitive kid. You'll rub the babies' backs if they're crying or tell Nora "we're coming" when she starts to fuss and are quick to give out hugs to the kids when they're crying. 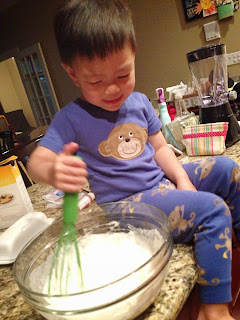 Every day I find new ways to be amazed by you.

You two are the best and I love you to bits.