Well so much for blogging more often! Haha, I wonder how many posts have started off that way...

So let's catch you up on what's been going on in my world. Hm... not a whole lot. I've been doing a bunch of bike riding, which I am really happy about. My biggest fear was actually that I would hate biking and that I would have spent all this money on a bike and gear and never want to use it. But, it hasn't been like that at all. It's a pretty neat way to get around town and get a little bit of fresh air. Last week I went on a bike ride by myself just to get some air! Tomorrow night I am going to attempt my first solo night bike ride. I'm actually a little bit nervous about it, but I think I'll be ok.

What else... in other exercise news, I haven't been doing any! I know, it's terrible. I decided the best way to get me to stop running is to tell everyone on the internet my plans to run. It's very counterintuitive, but the last time I talked about my plan to run a 10k or a half marathon, my running frequency and distance took a sharp downturn.

Work is work (and not to be discussed on the internet) and home life is good. We currently have some visitors (hi!) staying with us, but they are leaving tomorrow morning so the house will be quiet again. My brother, sister-in-law and their two nieces are in town for a few days at the end of their road trip that started in Boston, went up to Canada to Montreal and Toronto and then back into the States to Chicago. That in and of itself is a lot of driving, but they are also doing this in a mini cooper! Call me crazy, but I think that's nuts! But they seem to be having a good time and they still are talking to each other, so I guess it's been a success so far.

Well I'm hoping for this day to fly by so I can go home, hang out with the visitors and maybe go to bed early. This past week has been a doozy in the sleep department and I'm not just tired, but I'm actually exhausted. So a weekend of sleeping in is on my agenda!
Posted by rdg at 12:12 PM No comments:

Why don't I own Mary Janes?

Because seriously, how cute are these: 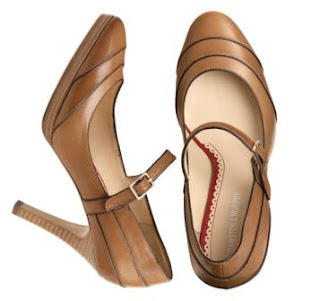 Two years (and a day)

So I meant to write this yesterday, but forgot/ran out of time... so just pretend this was yesterday...
Today (yesterday! haha) marks our two year anniversary! Can you believe it? Time has flown by! Sometimes it feels like yesterday, but then other times it feels like it's been forever (but not in a bad way). Last year for our first anniversary, we did a whole big celebration complete with a fancy dinner at Tru, bottles of wine and a tasting menu. It was amazing and memorable (but not cheap). This year was more relaxed but just as much fun with a bike ride to Kith and Kin on Saturday night for dinner. Although no presents were exchanged, we still celebrated and I loved how we marked the occasion (although if you want, I will accept diamonds!).
Anyway, the last two years have been amazing and even in the dullest moments I think we've made them fun. I can't wait to see what the future holds and am excited to celebrate all of life's milestones together. xoxo 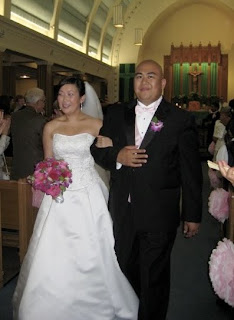 So I finally did it... I bit the bullet and bought a bike! Isn't that so exciting? And isn't it cute? 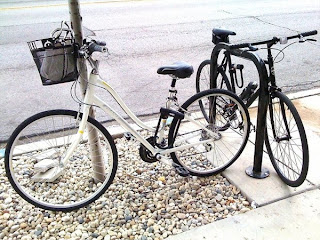 I made my maiden voyage on Saturday to pick up our vegetable share from Green Grocer -so it wasn't too far, but it let me get a little bit of experience since I've never ridden in the city before. And then because we were feeling extra adventurous, Huge and I rod our bikes to dinner! It was so great. I really loved riding and even with the cars and a little bit of traffic, it was manageable. Now the next thing I need to master is the Loop... that seems a little too crazy for me and further distances (since everything I biked to on Saturday was within 3 miles of my house). The only thing I need to do before then is get a little faster... I'm not such a big fan of going super fast (I'm afraid I'll fall), so I'm hoping this goes away as I get more comfortable on the bike. And at some point this summer I want to bike up to Super Dawgs (which is about 10 miles away) and then the sky's the limit!
Posted by rdg at 1:31 PM No comments:

Welcome July with a bang

Well hello lovelies and welcome to July. I know, it's already a week in, but it's been a busy beginning! Last weekend we all celebrated the fantastic summer holiday of the 4th of July. This is one of my favorite holidays -not because I'm overly patriotic (but yes, I do love America), but because this holiday has FIREWORKS! Seriously one of my favorite things ever. The best part is that my apartment has a western view that is unmarred by sky scrapers -so you have a a panoramic view of all the fireworks from the United Center to the south, the western suburbs and all the way north to Logan Square. To be honest, I'm not sure exactly what areas you can see, but in my mind that's how I see it!

My parents were also visiting from Boston, so it was fun to have them around for a few days. We didn't do anything super crazy and exciting, but it was fun nonetheless. We also (finally) ate at Tompolobampo -Rick Bayless' upscale place. It was really, really tasty food and definitely recommend going. Just be warned that you have to prepare ahead of time and get reservations early. And also if you're on a budget, you should save up! We pretty much spent our entire monthly budget for going out on this one weekend extravaganza -although the majority of it was for this one meal.

Other than that July has become very hot and humid in Chicago. I won't complain since we have a winter of cold coming (just around the corner), but it does make being outside a little less than desireable. Speaking of being outside... I want to buy a bike. Huge bought one and is enjoying riding to and from work, but I want one to be able to traverse the city and go explore the neighborhoods. The problem is that bikes are expensive! And I haven't ridden one in YEARS -and although there are bike paths and lots of bikers in the city, it still seems a bit precarious... so I think I'm going to bite the bullet and buy a bike this weekend. I'll let you know how my maiden voyage goes!
Posted by rdg at 1:07 PM No comments: