It seems like ages ago, but we went on a lovely family vacation to Hawaii for a couple weeks. And, it was amazing. Exactly what I needed -some time away to recharge, relax and hang out with family. My father had a milestone birthday this year and turned 70 (crazy! and hopefully he doesn't mind that I just outed him as a senior citizen) so to celebrate, my parents rented a house in Kona for all of us to stay. When I say house, I should say estate, because this place was big. Set on 8 acres, the house had room for everyone and a pool that Callan loved.


Our days were spent lounging and hanging out, which was all I wanted to do. The guys golfed, we ate, swam and got some sun. It was nice to see my parents, my brother and sister-in-law and uncle especially since we were not home for Christmas. Callan did great on the flights and adjusted to the time zone changes really well too. I don't have much to write, but here are some of my favorite memories and then I'll leave you with some of my favorite pictures from the trip (if you're on Facebook, you might have already seen some of them, but they're worth looking at again).


--------------------------
On our flight there, Callan was all about charming the ladies. He would laugh and smile and wave to all the women (especially his favorite flight attendant who could make him giggle like crazy), but for the guys, he was much more reserved and it took a minute before he warmed up to them. It was funny to see the disparity in his behavior and it shows how much of a flirt he is with the ladies.


We took Callan into the Red Carpet lounge with us and I laugh when I think of the look of terror some people had when they saw him in there (as well as on our flights). I secretly gloat and congratulate myself when people seem shocked and tell us how great/well behaved Callan is... it's like my secret mission to get people to change their minds about babies. Not all babies are screaming crying messes. It happens a lot at restaurants when we take Callan and I love when it happens in an especially not super baby friendly place and the servers seem extra surprised at how well behaved he is.


I loved watching Callan's face light up and hearing his laugh whenever he was in the water. It didn't matter that the pool was freezing cold, or the ocean waves were ready to sweep him out to sea, or that it was just water in the enormous bath tub, he was happy to splash and play in the water. He is a total fish.


We went more in the baby led weaning approach to solids so Callan eats a decent amount and variety of table food for a baby. My family knows this and somehow throughout the trip feeding Callan (or letting him taste things) morphed into some kind of game. I almost compare it to feeding a dog as everyone would give Callan a piece of whatever they were eating and he would just oblige by opening his mouth ready to taste whatever was coming his way. I realize that most people's diets relax when they go on vacation and I guess it was no exception for Callan. He got to try a variety of things. I would look over and someone (mostly nana and Ming Nat (my sister-in-law)) would be giving him junk food like french fries, ice cream, potato chips, tortilla chips or some sort of fruity drink. I think everyone kept forgetting that he was only 9 months old. Before someone calls DSS on me, it definitely wasn't a lot and he was getting lots of other nutritious things, but I just laugh at what this kid has eaten already.


I had never noticed (or thought of it), but Callan is a city boy and doesn't have a whole lot of interaction with grass. We don't have a yard and our playground is grass free so it was funny to watch Callan experience grass as he didn't quite know what to make of it. I sat him down on it but he didn't want to crawl around and every time he would put his hand down to crawl he would immediately pull it back up like he was afraid of what he was touching. It's even funnier because he LOVED the sand and could not get enough of the beach. Sometimes my kid is weird.


I experienced first hand how different traveling with a child is. Although this vacation was relaxing, it was a different kind of relaxing and my only complaint about this trip is that I didn't get enough sun because as smart as my kid is, he wasn't big on following directions and wouldn't remain in the shade so I could sunbathe! Haha, no matter what, it was still a fantastic vacation and I can't wait to go on another. 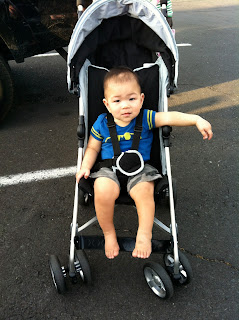 Callan got a new stroller for the trip and every time he was in it, he would put his arm out like he was cruising in a convertible... cutest thing ever. 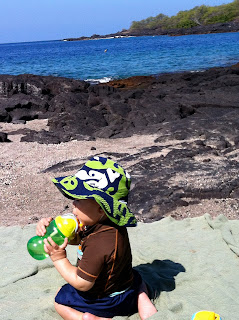 Looking like a toddler at the beach with his new cup with a straw -he decided sippy cups were for the birds and better things came our of straws (like yummy pina coladas!)
Sorry Callan's just in a diaper. It was late and we were too lazy to put his swim stuff back on! Huge has a better video of Callan swimming so hopefully I'll get to post that later.
Posted by rdg at 11:09 PM