Dear Callan and Nora:
At this point I can't even keep up with the passing of time. Days and weeks fly by and before I know it, another amazing month passes by. I can't keep up with it and I find myself having to count on my fingers trying to figure out exactly how old you are. We've had a lot going on recently and it's been hard to keep track of it all. I also know with the holidays coming up, the rest of this year is probably going to be a blur and soon we'll be celebrating birthdays (gah!).

Callan,
You are now officially two and a half. I am no longer counting exact months because it's too hard for me to keep up with, so you will be two and a half for a while (or until next year when I'll probably start referring to you as "almost three"). Your vocabulary and speech is growing in leaps and bounds and it's so fun to be able to "talk" to you. Your stories still require a little bit of interpretation and sometimes we make you repeat words (which I think annoys you at times since you so clearly are trying to tell us something!), but it's really remarkable to have these conversations with you. You have started the toddler "why" phase, which is both exciting and at times frustrating as you really want an answer to your questions that I sometimes don't have. I mean you want to know why it's windy outside or why it's raining. It's a good thing that we can ask Miss Frizzle some of these questions!  You're the only 2.5 year old I know that watches the Magic School Bus (kids from the 80s, remember this show? So great), but I can't blame you since you've got your father's nerdy science genes. The other shows in rotation currently are Word World, Curious George and Super Why. Thankfully, we got out of the Caillou rotation (although occasionally you do ask for it) and Mater Tales (from Cars). Since Nora's arrival, you've gotten to watch more tv since I need a few minutes in the morning to get ready for work and a few quiet moments to put Nora to bed, but I figure we held out for awhile and your tv time is still pretty limited in the grand scheme of things, so I can't feel too badly.

You also LOVE singing and you're getting much better at it. Your favorite songs to sing are A-B-Cs, twinkle, twinkle, Rock-a-bye-baby and wheels on the bus. Sometimes I try to sing along with you and you'll stop your song and tell me, "no sing mommy". I understand this -my singing voice has never been great.

You're also a great big brother. You love making your sister laugh and you'll sometimes get upset when Nora gets bored of your game and stops laughing. You'll tell me with a concerned voice that "Nora not laughing at me", which is so cute and melts my heart. You will go give her hugs and kisses unprompted and although we're still working on making sure you're not grabbing toys from her, you do seem (for the most part) concerned with her well-being and will at least try to "trade" her a toy.
You aren't the greatest sleeper and you are still unusually attached to your mommy, but I figure this phase will eventually pass (and when it does it'll seem too fast), so I'm trying to enjoy it as much as I can. You're almost fully potty trained (during the day -we haven't quite mastered the overnight thing yet) and you are getting to be more and more like a big kid every day and it's sometimes hard to remember you as a baby, even though it wasn't that long ago. 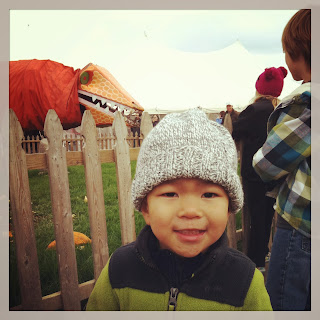 (This is you with the pumpkin eating dinosaur at the pumpkin farm. You reference this dinosaur a lot, which confuses most people since they were not there with you.)


And Nora bug,
You are 6/7 months old (?) and just great. I don't know what I have to say about you, but you're just so amazing and fun. You've got the best smile and with your giant cheeks, there's something really satisfying about getting a giant gummy grin from you. Your whole face lights up when you're happy and I won't lie, you're pretty happy most of the time.

You started moving this month and although you're not quite officially crawling on all fours (that might take a while, your belly kind of drags on the ground), you've got the army crawl down pat. And you're fast -especially when you set your sights on something (like Callan's toy).

You were just like Callan and a great sleeper, but something has been throwing you off (probably your teeth) and you've been waking up at night. It's not too terrible though. You're also the opposite of your brother and go to bed really early. I don't know if it's because of the time change, but your 7/7:30 bedtime has gotten bumped up. It means I don't get to play too much with you after work during the week, but I do usually get an extra snuggle or two from you during the middle of the night wake up.

We started you on solids around 6 months via the baby led weaning approach we used with your brother and you L-O-V-E it. You love feeding yourself and even though you don't have any teeth, you're eating like you've known how to do it your whole life. Unfortunately the introduction of solids has impacted your bowels, so we've been giving you some pureed prunes/pears/etc. So far it seems like you don't have any aversions or allergies, but we've mostly been sticking to the green veggies and fruits. You've had yogurt and a little bit of meat/fish and so far you're loving it all.

Anyway, Nora bug, you're awesome and although you might not have as much of your life documented as your brother, you're no less loved. 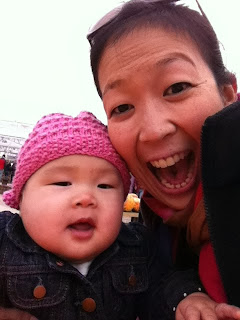 (seriously, look at those cheeks!)