Hm, these updates are pretty boring... but for posterity's sake, I'll keep them up. I mean, I've come this far!
Weight: still gaining. Just over 30 lbs now
Maternity clothes: At this point I really should be in all maternity clothes, but I'm still squeaking by with some of my shirts
Stretch marks: Still non-existent (thank goodness).
Baby Movements: He's landed some really good kicks/punches this past week. I've gotten used to most of them, but every now and then it'll be really big and it'll throw me off. We are also probably annoying the crap out of him as Huge and I are prone to poking and prodding him to see if we can identify body parts -and that inevitably get baby G a little riled up. Also I've been having these weird pulsating movements... I don't think they're hiccups b/c they feel different than the baby's movements, so I wonder if they're Braxton Hicks. Guess I can check with the doctor.
Cravings/Aversions: I'm trying to be better about the food I'm eating. I need to start eating a bit less as I get full pretty fast and there isn't a whole lot of space so when I overeat it gets very uncomfortable. I'm also trying to control the sugar input and it seems to be that if I avoid it I do ok, but once I start it kind of just snowballs out of control.
What do you miss: Not having my stomach feel so stretched. It kind of hurts and it's as if I can actually feel my skin stretching.
Other: Heartburn has come back and my tailbone hurts from sitting. It makes working a little uncomfortable. We have an ultrasound tomorrow to check on the little guy's growth and I'm interested to see how he's positioned and to see if we can figure out the body parts that we've been poking and prodding. I have a feeling he's head down, but at an angle or stretched completely horizontally since I feel most of the movements on the sides and sort of at the bottom half of my belly. Hopefully everything will be fine and I can let you know if I was right about his position.
Here's this week's belly -definitely bigger and p.s. belly button is still in :) 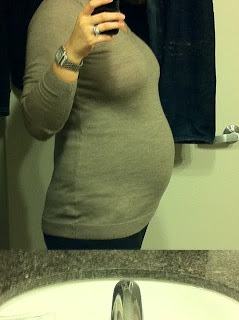