I first heard about the Wonder Weeks from my friends when they were going through Wonder Week 19 with their daughter back in June. At that time Callan was only about a month old so I filed that info in the back of my mind and continued on. Then a few days ago I complained about how Callan had been fussy for the past week or so and then something in my head clicked. I pulled out the calendar and realized, hey, Callan is about 19 weeks old... time to pull out that book! I missed the other wonder weeks, but I read the chapter on week 19 and realized that Callan's behavior fit into the mold.
The premise of the book is that in the first 14 months of a baby's life there are 8 major developmental milestones and mental leaps that are made. These are classified as "wonder weeks" and are generally marked by a fussy period or period of time where the baby's behavior differs as they are trying to figure out the world around them. Some of the behaviors Callan exhibited including waking up at night after sleeping through for weeks and the extra attention he needed were all signs mentioned in the book. Wonder Week 19 is called the world of events and this is when a baby realizes that actions are not individual and are part of larger "events". I'm probably butchering the explanation, but it is worth a read. I missed the first 3 wonder weeks, but I'll be sure to read to prepare for the next wonder week (at week 26 -and someone remind me of this in case I forget and start to complain about his behavior).
According to the book, once that mental leap is made, the baby goes back to exhibiting their normal behavior. I'm happy to report that I think we're done. Callan is back to sleeping through the night and back to his laid back, less fussy attention demanding ways.  He's also made some physical jumps and has become a master roller and quite tactile with his toys -- so all that work paid off and wonder week 19 is done. 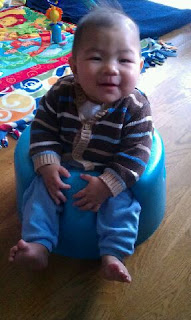 Callan sitting up in his Mr. Rogers sweater.
Posted by rdg at 2:43 PM