This past weekend was full of excitement as 3 of my best friends from university college (I have to use the colloquial term college even though to all of them it was university) came to visit . Anyway, this was the first time I had seen them since Kevin's wedding last September. As much as things have changed, things have remained the same. The obvious difference was that Callan tagged along to most of our events, but even with all the time and distance that seperates us, we can get back together for the weekend and pick up on the same jokes and fall back into an easy banter that is as comfortable as your favorite sweatshirt. It was the first time that 2 of them had been to Chicago so we tried to do as much of the touristy things as possible without going overboard on all the sightseeing. Of course part of our weekend revolved around the Chicago night life and again, I ask myself, when will I learn? I asked myself this same question last June and shockingly since then, I have not gotten any younger... and I can stay out until 4 am, but I can't be counted on to function too well the following day. It doesn't help that I don't have the luxury of sleeping in past 10 am like some of the others on the trip did.

Anyway, we had a good time and we realized that we need to do this every year no matter where we are. And it'll be interesting to see how the group expands as people get married and have kids. So for the rest of the McGill crew, be warned. We're doing this again next year in Montreal (to celebrate 10 years! Yikes, when did we get old) and we expect you to attend! 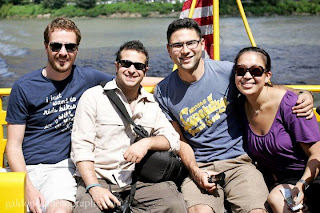 The crew on the water taxi on our way to China town.

Seriously, boys with babies. How cute?!? 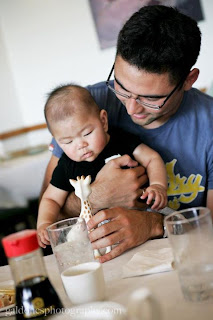 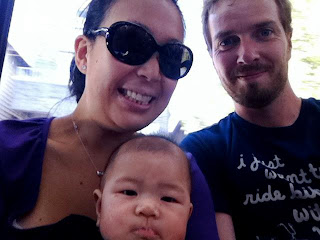 This picture was taken after I finally got a seat on the bus. As an fyi to all of you, if you see a lady (or man) holding a baby on the bus, you should offer them your seat. We got on to a fairly crowded bus so we folded up our stroller and took Callan out. But all the seats were taken so I was stuck standing holding on while also holding Callan. It's a good thing he's such a chill baby... otherwise it could have been a disaster.