Wow, this post is late... I wanted to write a recap about our first Easter, but then I realized that this wasn't actually our first Easter as a family.... Even though Callan isn't quite a year yet, he was here for Easter 2011 -in fact, he was 3 days old and we were discharged from hotel Prentice that day. Look at this muchkin getting ready for his first car ride home! 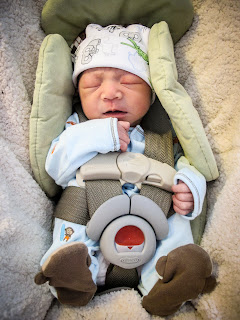 And now look at him this Easter -he's such a different person. 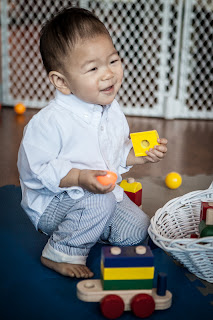 Anyway, Easter 2012 was a great success! The Easter bunny came and gave Callan a stacking train toy and some empty Easter eggs (don't tell him that there's usually candy in those  eggs as he was more than happy playing with the empty ones). Callan decided that Easter was so exciting and pretty much refused to nap all day (finally got him down for an hour nap -but for reference he usually takes two naps and sleeps closer to 3-4 hours during the day), but he was still pretty great. We had the Cassidy-Bach's come over for an afternoon play date and then our friend Denis along with the Martin family came over for dinner. It was the first weekend Huge had been home for awhile, so it was nice to spend the time together with friends and family, and overall a great Easter. weekend.