Wow, this was a big week. I'm officially halfway done (assuming I go at 40 weeks), but it could be earlier, which is kind of scary! So this was the week of the big anatomy scan and it revealed the little peanut to be a BOY! Sorry mom, you're going to have to return the pink ruffly outfits you've bought, but there are some cute boy clothes out there and when they're toddlers you get to dress them like little adults, which I think is adorable. Even though we've seen the goods (so to speak), I thought it would be fun to see what all the old wives tales said about the sex of the baby.


Carrying high or low: I'm not super big, but I think it's kind of low, so that means boy.
Heartbeat: The heartbeat at all the appointments has been over 140, so that means girl. (Coincidentally, at the anatomy scan, the heartbeat was 138, so that would have been boy).
Sweet vs Salty cravings: I've always been more salty/sour over sweet and pregnancy hasn't changed that (in fact at the beginning sweets made me sick), so that means boy.
Chinese birth chart: That says boy.
Even vs Odd: According to Mayan legend depending whether on the age of the mother at conception and the year are even or odd can tell you the sex. I was an odd age and an even year, so that means boy.
Ring test: We could never really get this to work, but generally it was in some sort of circle, so that would mean boy.

Huh, now that I look at all this, I guess we shouldn't have been so surprised it was a boy! Oddly enough almost everyone who ventured to guess what I was having said girl... but maybe the old wives tales aren't so old fashioned.


Now for the regular weekly update:
How much weight have you gained: I am now up officially 15 lbs. For 20/21 weeks that's not bad, but I'm a little afraid of what the next 20 weeks will bring...
Maternity clothing: I am in maternity pants full time (minus my sweatpants, pajamas and anything I owned pre-pregnancy that had an elastic waistband). I'm still swinging regular tops (which is why I say I'm carrying low), but those are starting to get shorter and shorter so I'm assuming that I may not need them for width, but I will start needing them for height. As you can see from my picture below, that is a regular non-maternity tank top that is starting to creep up (although wearing low slung pajama bottoms probably isn't the best indication of how long it is).
Stretch marks: None yet, and I really hope I don't get them. Not to be vain as I never had a great looking stomach to begin with (more because of the excess flab than anything else), but I don't think I fully comprehended what stretch marks were and now that I've seen pictures, they are kind of gross. I know now that I said this I'm destined to get lots of deep purple ugly ones, but I'm really hoping that passes me by.
Baby movement: Yes, we have definitely felt the baby move. I have an anterior placenta so the doctor thought it might be a bit longer before I felt anything and definitely didn't expect Huge to be able to feel it yet, but we both have and it's pretty cool. They're not super strong yet and still more like flutters, but strong enough to feel from the outside and day by day they seem to be getting more frequent and defined.
Cravings/Aversions: Nothing
What do you miss: This weekend we had friends in town visiting and we went to some great beer bars. I had a sip or two to taste some of the beers, but I kind of missed that. It was the first time though and it wasn't that big of a deal, but I forgot how tasty some beers are.
Other: I've been having sciatic pain (or at least I think that's what it is) and it literally is a pain. It sometimes feels like Baby G is on my (last) nerve (haha) and it's super uncomfortable. I'm a little afraid of what the future holds b/c I'm definitely not that big and have a whole lot more growing to do!


Also, we had our anatomy scan on Friday as mentioned and although it put our minds at ease about a lot things it also brought up some other concerns. It seems that I have partial placenta previa -where the placenta partially is blocking the cervix. At this point it's early and there's still time for the placenta to move, but it could be an issue later when it comes to delivery if it hasn't. And then there's the issue of SUA (single umbilical artery) -the umbilical cord has one artery and one vein instead of the usual two arteries and one vein. This could pose a problem with organ development and then later with the baby's growth. My doctor doesn't think there's a problem, but they have to check everything and will keep an eye on how things progress. I joked that it might work to my advantage and give me a regular sized baby instead of the giant one I was destined to have! To be honest I'm trying not to be too concerned, but it's still kind of worrisome. I would have preferred a total "everything is fine" kind of appointment. Oh well. I have another more detailed ultrasound scheduled for Thursday and we'll get to see the little peanut then. Until then here is my ever expanding belly! 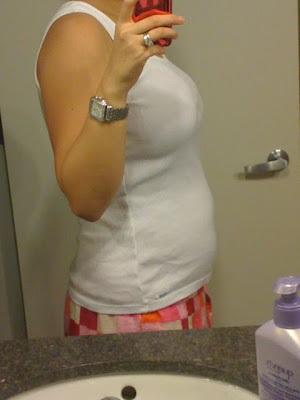