Weight: I didn't gain anything since last week and may have even lost a little. I haven't been super hungry recently, so other than the gallon of orange juice I've been drinking a week, I actually have a fairly normal diet.

Maternity Clothes: Yes and I am getting sick of them. I see all the cute clothes around me and I can't wait to dress like a normal person again.

Baby Movements: She seems to have a decent amount of room in there or at least it seems that way based on her movements. Towards the end it's supposed to get less agitated, but she's still bouncing around.

Cravings/Aversions: Nothing new to report. Same as last week. My appetite has definitely diminished and I'm not having full out aversions, but something that sounded delicious to me a minute ago now is the furthest thing from what I want.

Other: The swelling seems to have calmed down a bit (probably helps that I'm not eating as much) and I've decided to become a sensible person and stop wearing heels. I'm still working (and commuting on the train), but those days are definitely numbered. We are actually contemplating an induction next Wednesday (when I would be 39 weeks). I technically am a good candidate since I've already started dilating and effacing (funnily enough, I'm at the same point I was last pregnancy. Between the last 2 appointments I didn't gain any weight and I didn't dilate any more, but I'm slightly more effaced --just like last time!) and I had pitocin last time so I know I won't have a crazy reaction to it. And it makes sense. We could get someone to come in and help for a bit, we wouldn't have to worry about Callan and Huge's work schedule is perfectly aligned as he'd be home for 2 weeks straight. So it seems like the best thing to do, but for some reason I'm really hesitating. Part of it is knowing that life as we know it is about to totally change (which, I get logically was going to happen anyway, but maybe knowing that there's a deadline now makes it different? Who knows -can you really reason with a pregnant lady?) or having to really acknowledge it's about to happen with a finite countdown -like this could be Callan's last week as an only child... The good news is technically I don't have to decide until next Tuesday, but in reality if this is going to happen we've got to decide a heck of a lot sooner so we can get our ducks in a row. And in other news, Huge is away again this weekend... Can a 9 month pregnant lady and an almost 2 year old assemble a crib and put together a baby's room on their own?!? haha. And if we schedule this induction is it going to be Murphy's law where the baby is going to come even earlier because I am having some serious Braxton-Hicks today!

Of course, here's today's picture... Don't be alarmed by the giant-ness! 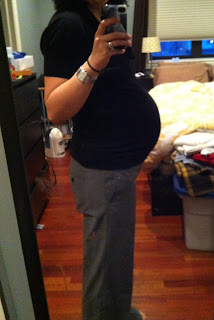