I'm officially full term and at this point baby G is just freeloading! I'm ok with having him stay put for a little while longer, but I'm not sure exactly how long until he overstays his welcome. I've decided to do the weekly updates on Tuesdays now because that is when I have my doctor's appointments and I'm *sure* that you're all dying to know how those go too (ha) and I'm much too lazy to do two posts in a row.

Weight: Still gaining. According to doctor's scale I'm up 2 lbs and I think it's about the same at the home scale. I've officially broken 45 lbs. yikes.

Stretch marks/belly button: No stretch marks and the belly button is still fluctuating. I have however discovered I have cellulite. I know that this shouldn't be so earth shattering especially since I've gained 45 lbs, but even for a kind of chubby girl I never had cellulite before (unless I squished my fat together), but now I think I'm starting to get it. Sigh. I'm hoping once I pop the baby out and lose the weight the cellulite will go away.

Baby Movement: Same as before. Lots of stretching and rolling. He's been getting the hiccups pretty regularly as well, which is always reassuring.

What do I miss: Still walking with a limp and although I don't think I'm quite waddling yet, it's definitely uncomfortable to stand or walk for long periods of time. I also miss being able to walk briskly. I have become a s-l-o-w walker due to the discomfort and I am not used to it at all. I enjoy walking with a purpose!

Other: The last few days have been the first where I'm feeling done with being pregnant. I have been lucky that since about week 16/17 I have been feeling pretty good and not too bogged down by pregnancy ailments. However, the last few days have brought on the fatigue, backaches, soreness and cramps almost full time and I could really do without all of it. I'm also still working, but my head is not in it 100%. I need to get cracking on a plan for when I'm on leave, but somehow the days keep getting busier and busier with less and less getting done on my to-do list!

Dr's update: So my doctor cracks me up. She told me today how I have a "beautiful cervix"! I love it. Only she could say it with a straight face and mean it. Anyway, I'm almost 2 cm dilated and about 50% effaced... Granted I could be like that for weeks, but we both have a feeling I'll go before my due date. She said for a first time mom that's a lot of progress and the cramps/contractions I've been feeling seem to be working.

Here's the picture of the week. I always am a little surprised when I see how big my belly is. I think it also looks a lot bigger this week because the little guy changed positions so his butt is more in front rather than to the side as it has been. The bump isn't as wide and is more long now. Still can't tell if I've "dropped", but his head is definitely down. 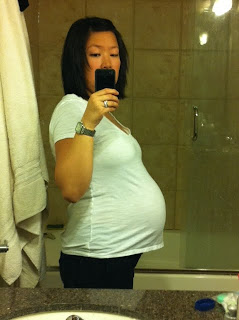