Hey, guess what time it is... another pregnancy update. I have to say that these are pretty boring (although I have a feeling it's probably been like that for awhile).

So here goes:
Weight: Up, but I went to the doctor's and the scale claimed I didn't gain -which after last appointment's 8 lb gain, I better not have! It's still under 50 lbs (yes, that's my new barometer, so clearly my standards are low), but above the 35 average.

Maternity clothes: Pretty much, although the shirt and sweater below are not. So anything long and loose can still fit over the pooch.

Stretch marks/belly button: Nope, but the button is getting close.

Baby movement: Lots of rolling and poking still. Sometimes I swear I can feel actual limbs sticking out. He's been getting a lot of hiccups, which I read was good b/c it means he's practicing his breathing and swallowing, and there seems to be some sort of spasm-ing going on, but that's pretty infrequent.

What do I miss: Nothing new. Same old.

Other: I've really got nothing. I had a quick doctor's appointment today and everything looks good. No weird symptoms or problematic things to report. My next appointment is in 2 weeks and we'll get to take another look at the little bugger and then from then on I'll be full term and going to the doctor's weekly. Crazy times! 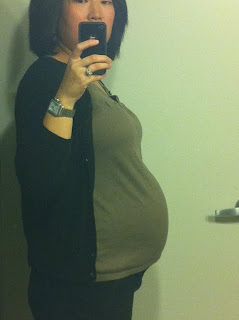