Weight: So I'm not sure what to think. I'm definitely growing, but I went to the doctor on Tuesday and nearly had a heart attack. She weighed me in 8 lbs over what I weighed in at home! Usually I'm about 2-3 lbs heavier b/c of my clothes/water/food I consume before I get there, but 8 lbs! That's crazy talk. So according to my doctor I've gained 8 lbs between appointments -which are only 2 weeks apart. I'm hoping her scale was wrong, but my doctor thinks I'm starting to retain some water, which might be true as my hands have been hurting a bit, but I'm just not sure it's 5 lbs worth. Sigh. If I hit 200 lbs, I might cry (well, let's be honest, I definitely will cry). I guess it'll make for a better bouncing back from pregnancy story! I can talk about how I lost over 60 lbs!
Maternity clothes: Yup
Baby Movements: He has been going crazy in there. It's been fun "playing" with him before bed -mostly it consists of Huge or myself poking him and he'll retaliate by either poking us back or rolling over to the other side of my belly trying to get away from his crazy parents. He's definitely getting big and I'm sure he's going to run out of room soon. If I lie on one side for a long time he curls up and I end up with a lopsided stomach and he also likes to stretch out as far as he can and poke me from all sides. We're trying to capture his movements on video, but usually by the time we decide to videotape him, he's decided he's had enough.
Cravings/Aversions: Same old story -too many sweets, too many carbs (also contributing to the 60+lbs I'm gaining. haha).
What do I miss: Hm, I'm going to say my clothes. My wardrobe is starting to get really limited and since I'm so close to the end I don't want to buy any more maternity clothes.
Other: Well, I'm starting to retain some water, which is making my fingers swell a bit and some pain in my hands, although some of it seems like joint pain. It's not so bad that my rings have to come off, but I'm not sure they are going to survive another 2 months. Also, I have this weird pain in my left heel. It hurts to apply pressure on it directly -so walking around barefoot is pretty painful. I'm also actually starting to get concerned about my weight. I know at this point there isn't much I can do, but I'm afraid that after I have the baby I'm not going to fit back into my clothes -and that would be sad! Otherwise, everything is progressing nicely and I don't have much to complain about. Everyday it seems like there is a noticeable difference in the size of my belly. I'll be interested to see how big it ends up! 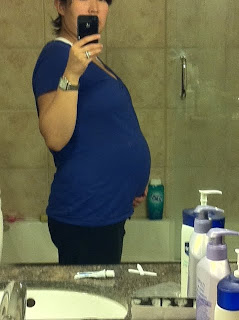