I feel like I just wrote one of these, which I guess technically I did since last week's was so late. We are back on schedule this week, so here's the updated on me and baby G.

Weight: Still up. I'm not sure what it is officially... but it's definitely still creeping upwards. On my scale at home it's not too bad. We'll have to wait and see what the doctor's says next week.

Stretch marks/Belly button: No stretch marks still and belly button is still in (except for when baby G decides to kick it out at night).


Baby Movement: Still the same. Lots of rolling and poking and sometimes rhythmic tapping. He's still really shy though and will move and bounce around, but once the video camera comes out he stops. And once the camera goes away he'll start back up. Little does he know, he better get used to having a camera around otherwise he's going to have one unhappy dad!


Cravings/Aversions: I keep reading about all these first trimester symptoms that are supposed to crop back up during the last and so far (knock on wood), I seem to be symptom free. I'm still eating a bunch of sweets (including inhaling the boxes of girl scout cookies that are lying around), but that's not so much a craving as an indulgence. The good news is that I am going to give up cookies for Lent -which is kind of a cop out since it doesn't include candy or other dessert substances, like cake and ice cream, but I think cookies right now are the biggest problem (and most accessible) so giving them up for Lent is a step in the right direction. Of course that means I have today and tomorrow to get my fill -fat Tuesday is going to be taking on a whole new meaning!

Other: Rings are still on, but the tightness in my hands is still there. I also think my feet are starting to swell a bit-nothing too major, but I think I can see it. By the end of the day my belly is sore from stretching and is visibly bigger than the morning. It's obviously not all baby as there's some food, liquid, bloat and gas in there and by morning it deflates a little bit. But it's still growing daily. We took our first class yesterday and it's reinforced the fact that we're in the home stretch!

I did this week's picture in a dress because I think the bump is more visible and defined. I also have ridiculous hair going on in this picture -definitely time for a haircut! 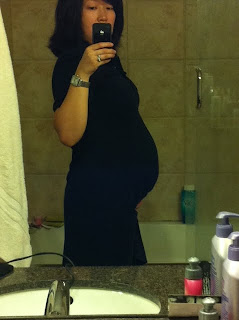